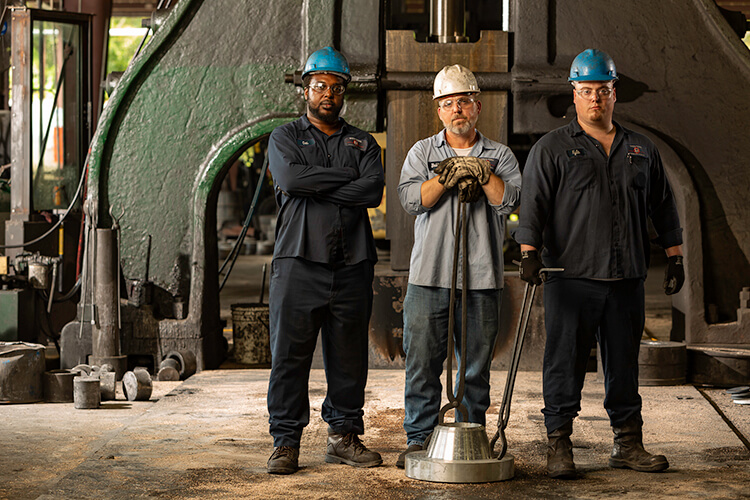 Western Forge & Flange has been forging, heat treating, machining, and testing pipe flanges in the USA for more than 75 years. Founded in Santa Clara, California in 1944 to supply Pacific shipyards with closed die forgings during wartime efforts, Western created its niche in the forging industry and became one of the largest forgers in California. During the 1960s Western concentrated on providing world class flanges in exotic alloys including Hastelloy, Inconel, Titanium, Duplex and Super-Duplex, stainless, and copper nickel. The company also expanded operations to include open die forgings, ring rolling, and custom machine work to provide finished parts for a broad range of essential industries including military, petrochemical, and nuclear applications.

In 2007, after over 60 years in California, Western Forge & Flange moved to Cleveland, Texas. The new location provides access to critical supply chains located in Houston, which is home to a major international port and many of the world’s leading energy and petrochemical companies. Now, we are geographically positioned to ensure time-sensitive deliveries and minimize customer downtime.

In 2019 Western Forge & Flange was acquired by Wynnchurch Capitol and became partnered with the fittings company Penn Machine Works. Together, our companies are able to offer an extensive array of products, capture new markets, and increase supply chain optimization.

Today, Western continues to grow with more than 80 employees fulfilling specialty functions such as engineering, quality, inspection, and production. We use proprietary technology to forge some of the hardest, most difficult alloys on the market into 100% quality-controlled flanges. Every product undergoes a rigorous, sophisticated monitoring and quality assurance program, from heat treatment to testing to the final inspection. Additionally, Western is in full compliance with outlined ASME, PED, ISO, and TSSA standards, a distinction held by only a handful of forging providers in the United States.

Western Forge & Flange is proud to be a global supplier of single products and multiple-run orders of forged shapes up to 2,500 pounds for a multitude of industries worldwide.

We comply with all of the certifications needed for your industry.